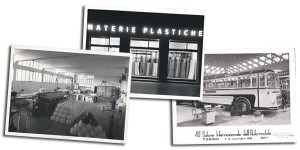 IT ALL BEGAN THEN

It was far in 1954, Italy had recovered from the war and the years of the economic boom were beginning to take shape, the first live television football was broadcast, the mountaineers Compagnoni and Lacedelli were the first to conquer the summit of K2, small and large miracles were taking place. Among these, an idea quickly took shape inside a workshop in the historic center of Bologna. As a simple seller of plastic profiles and sheets for thermoforming, the forty-year-old Arrigo Zucchelli sensed that plastic would change the world, with thermoformed plastic he began to produce all kinds of objects, from small buttons to large windshields for couriers; the fruit of his work soon became coveted in the most disparate sectors.

THE SHOP CLOSES AND THE COMPANY DEBUTS

One day, almost by chance, Arrigo saw a rudimentary hood dryer used to dry hair and from there he changed everything, he decided to produce his own line in plastic; in a short time the demand for hoods and doms grew enormously, forcing him to industrially organize the business. Soon it was also necessary to leave the small workshop in the historic center and all production was moved to the first Bolognese suburbs where the first real Zucchelli factory took shape.

FROM HOODS TO TROLLEYS

In the mid ’70s Arrigo discovered the advantages of injection molding; seizing the opportunity to greatly increase productivity by cutting costs, he married the new technology by purchasing various presses, and immediately realized that in addition to hoods he could produce other objects for hairdressing salons. He therefore created, among the first in the world, the production of professional plastic trolleys for hairdressers. Success came immediately, leading Arrigo to have to move again to a larger building, designed and built to measure for the new Zucchelli industrial plan.

TWENTY YEARS OF NEWS THANKS TO THE INJECTION

IN THE FOOTSTEPS OF ARRIGO LOOKING TO THE FUTURE

The high productivity achieved made it possible to absorb an ever increasing demand for products. The natural consequence was that the horizons widened and we began to collaborate with foreign customers; the great ferment of the market led to the creation of many new products, the unstoppable creative genius of Arrigo conceived the linear and essential design, which is still the basis of the whole Zucchelli style today. It is in fact incredible how much the products of that time are still current, the right look and the unparalleled value for money of the products further consolidated the market position.

For the Zucchelli company, become a leader in the sector, 1995 is a sad year because it sees the death of the founding father Arrigo Zucchelli; his son Stefano will be at the hoods of the company, assisted by a consolidated team of managers.
Strong in the values ​​and passion handed down by the founder, they will be able to successfully lead the company until 2006, the year in which Stefano decides to retire to private life favoring Fabio Contri, a manager who trained in the company from a very young age.

The company now has a large number of molds and equipment and a large wealth of experience. Strengthened by this legacy and by the teachings of maestro Arrigo, we focus on fresh and innovative ideas to complete a renewal process that is already underway; with a young and dynamic staff we face the new challenges imposed by the contemporary market with optimism and improving day by day we are committed, today as 60 years ago, to fully satisfy the needs of all our customers.

We use cookies on our website to give you the most relevant experience by remembering your preferences and repeat visits. By clicking “Accept”, you consent to the use of ALL the cookies.
Cookie settingsACCEPT
Manage consent

This website uses cookies to improve your experience while you navigate through the website. Out of these, the cookies that are categorized as necessary are stored on your browser as they are essential for the working of basic functionalities of the website. We also use third-party cookies that help us analyze and understand how you use this website. These cookies will be stored in your browser only with your consent. You also have the option to opt-out of these cookies. But opting out of some of these cookies may affect your browsing experience.
Necessary Always Enabled

Any cookies that may not be particularly necessary for the website to function and is used specifically to collect user personal data via analytics, ads, other embedded contents are termed as non-necessary cookies. It is mandatory to procure user consent prior to running these cookies on your website.

SAVE & ACCEPT
← Back to login